My sister came to stay...

My lovely sister came to stay, an event that had been eagerly anticipated. 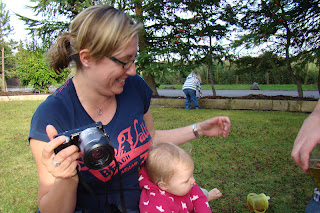 I had worked Wednesday, Thursday night to secure the weekend off, so I was a little nervous about being able to stay awake all the weekend. Thanks to my wonderful parents, I managed to get a good day's sleep while they went about their daily tasks with little Edie in tow. I think having her car seat in the land-rover gave them a new sense of freedom. She went to the doctors, the shops and the station, giving passers-by the glad eye wherever she went. An asian chap at the station was particularly enamoured with her. Only the other week, a different asian chap gave her fifty pence at Sainsbury's just for being her. 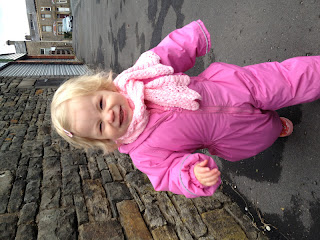 The weekend consisted of a Chinese and catch up on Friday night, not too late thankfully. On Saturday it was time for Bailey's hairdo down at Anubis grooming studio.

A quick trip to the shops to pick up some pink wine for the evening (how summery) and some paraphernalia for making cupcakes with Freya. Then it was home time to bet on the Grand National. We did a bet for each of the adults and the two girls. Freya's horse was called 'deep purple' because of her passion for anything mauve and Edie's was called 'treacle'.  Luckily neither of those horses were shot leading to an inevitably uncomfortable discussion about euthanasia. 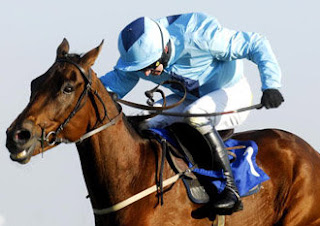 Craig usually picks a good horse, manages to place then phones up to gloat to his dad but he was quiet in defeat this year. He did mange to blag some money from an introductory offer at the 'paddypower' website, £66 quid, better than a kick in the stones.

Becky then popped out for a couple of laps around the Entwistle reservoir before dinner. She is trying to knock a few pounds off despite her very fit physique. If she completes her target Serge is going to bankroll her tattoo. We had planned to run together but my recent illness had made me comparably feeble, so I gave it a swerve and made princess cupcakes with the girls instead. 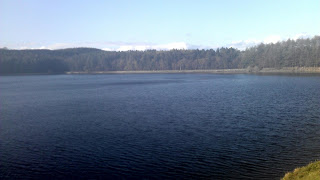 Sunday was mum's birthday, she hadn't been well yesterday so probably good to give her a bit of rest. It was a beautiful morning. We went out and had breakfast of hot cross buns and a brew in the garden while the kids pottered about in their PJ's and wellies. I have been pleasantly surprised by the effectiveness of our new window mounted bird feeder, the sparrows are going mad for it. So we sat and watched the birds in the sunshine.  As is usual with the girls around, there wasn't too much time to linger, so we went and got ready for swimming. 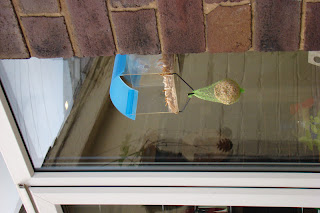 In the afternoon, armed with a shop-bought cake, some booze and trivial pursuit we headed up to mum's for a birthday buffet. We were pleasantly surprised to find mum in finer fettle than previously. 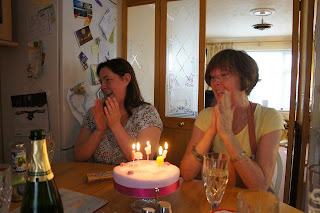 Our plan to put the girl's down at mum and dad's and then take them home later made for a very enjoyable relaxed evening. Craig thrashed us all at Trivial pursuit but we did give him a run for his money. Then we played a game that Nick and Nick had introduced us to. Basically, you write down six categories i.e.
Then somebody thinks of a letter and you have to be as quick as possible finding something for each of the categories. First one to think of something yells "Stop" If no other player has the same answer, you score10 points, If you share an answer with another player, you score 5points and 0points for no answer. Simple, yet funny. Kept us busy until it was time to lift the girl's and carry them home down the hill wrapped in blankets against the cold and starry night.

We squeezed every last drop out the weekend by going charity shopping on the Monday afternoon. I had a decent haul of 2 pairs of jeans for Freya, some vintage Amy-Butler-esque pillow cases and a toy hard hat for the ever expanding dressing up box. Becky got Freya a very seventies smoked glass cup and saucer so she could have grown-up tea at nannies. 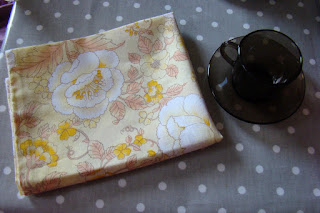 And then she was gone...Edie and I shared a Creme Egg to ease our suffering. 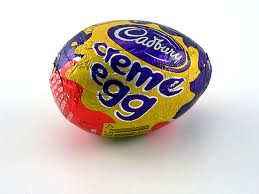