My Birthday and Beads.

Another year older again. It is expected that as you get older that you will care less about birthdays but what is not to like?

Mum organised a little tea party and baked a cake. Homemade Victoria sponge, just like when I was little (literally like mother used to make). Edie is first to the table of course. 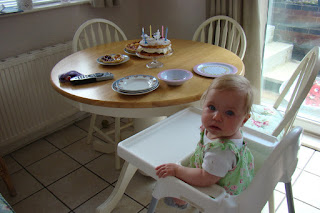 We had all made a bit of an effort, meaning that the kids were less covered in crap than usual and the rest of us weren't just wearing dog walking clothes, as is the norm. 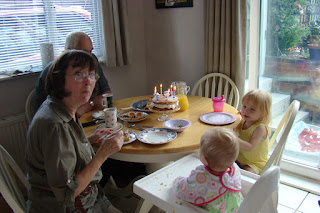 The cake is looking a little Fanny Craddock in this picture but multicoloured candles and glittery flowers add to the seventies appeal. 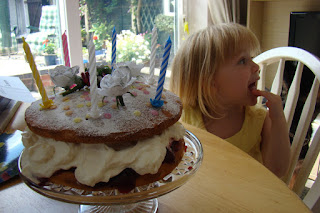 Mum had already bobbed down earlier that morning to bring some beautiful hydrangeas from her garden... very country living magazine. I was pleased as punch. 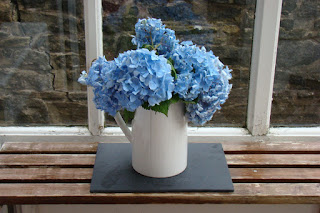 For a present from Mum I had asked for a jug cover. I remember playing with our muslin one when I was a kid. It's a totally retro item but I have found myself genuinely in need of one. On the mornings when I cook porridge, in true fairytale style, I find it needs to be left to cool. The girl's little bowls go out in the porch but there is always something buzzing around out there hence the need for a jug cover. 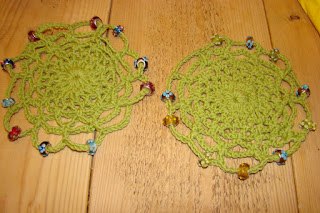 I had found the pattern free online at this wonderful blog jellywares.blogspot.com. Although her shots of blue wool looked great, I picked green because it is my favourite colour. I fell in love with these beads that I found online, glass 'pandora-style' beads. 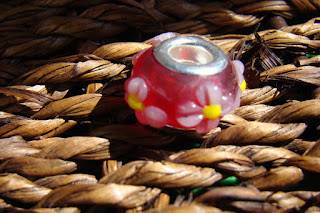 I could have bought hundreds of these. (Still loving macro mode on the camera) 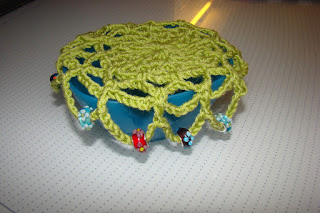 Here it is all put together and insitu on one of our little porridge bowls. What a great present and what a clever Mum I have.

Not to be outdone, Dad made us a garden bench and table set using reclaimed, cast iron, ornate bench ends bought in the auction and sprayed 'Victorian' green. Very impressive indeed and they are perfectly in keeping with the house and garden. It had been noted that we had to carry our two chairs with us up and down the garden to follow the sun. Now there is always somewhere to sit and have a brew.

This is a dreadful photo, badly framed, badly composed shot and sun glare but it's the table and it's late. 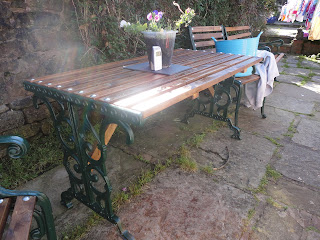 Craig also played a blinder. He decided to buy me a Cath Kidston handbag... good choice but there are so many to chose from, I was a little apprehensive that he might have spent a lot of pennies on something that I didn't love. After a bit of 20 questions we ascertained that he had bought me the perfect style (mini tote) and in the matching fabric to my gym bag thus fulfilling my dream of matching luggage too. I don't know who was more pleased, I really don't. 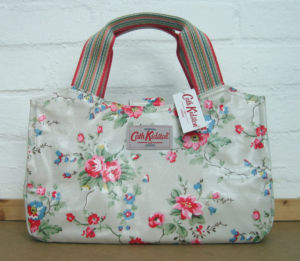 Finally, Becky decided to pay for a return ticket to Dundee for the weekend at my earliest convenience. A little time to be myself rather than being somebody's Mummy, what a great gift... champagne thursday three days in a row. 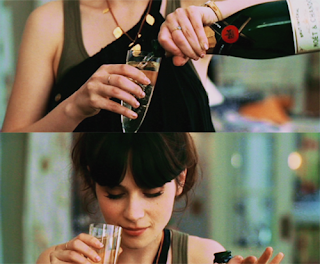 While I write this Craig is killing Nazi zombies in 'Uncharted'... aren't zombies bad enough without being militant right wing fascists?
Posted by Herding Cats at 23:51