Ooh it has been so long since I have been here, after making wild promises about posting everyday. There are a couple of reasons for my absence really. I am still finding having two under three a real challenge... I was chatting with Emily the other day and happened to mention that 'I still cry three or four times a week' and she was a little shocked by that... maybe that is too much? Needless to say it's hard work still. Also I have been cheating on blogger with Pinterest.

Basically, you collect images from the internet and put them on 'pinboards', food, hairstyles, houses, holidays, cartoons, everything and it is seriously addictive. I will have to reign in my habit a little.

Anyhoo, I digress. The title of the post wasn't about Kate Middleton and Price William opening up Darwen Academy earlier this year, (last state duty before their wedding incidentally, commemorated with a tree in Bold Venture Park no less.) but about us having a spate of visitors.

The first of these being 'Aunty' June. Pictured here on the left at New Year 2009... 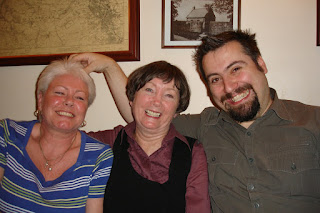 June is an old friend of Mum and Dad's. She is always really good company and comes up from Bexhill a couple of times a year with Bodger and Nelly (the biggest jack russell ever and the sweetest staffordshire bull terrier). We were really lucky when Edie was born, June had come up to visit hoping that things would get moving when she came, and they did, so she was able to meet Edie on her first day. June tends to visit in the school holidays around her job.

As is usual when Mum and Dad or we have visitors, we tend to gather round at ours for a meal, some 'fizz', a bit of music and chatter. Craig tends to do the food, I lay the table and mum provides the pudding. Hmm, homemade strawberry cheescake, lush. 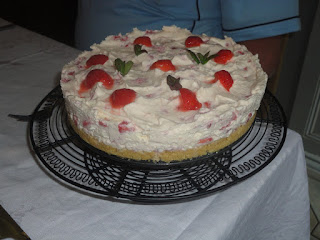 Next up was Nanny Pat and Grandad Ray fresh back from Bulgaria, looking tanned and rested (bastards). More fizz.... Its always nice to catch up with them, they fill us in on news from Grimsby and their most recent escapades. They also get to spend time with the girls and Craig and his dad usually end up sharing a drink and a 'discussion'  at the end of the night. 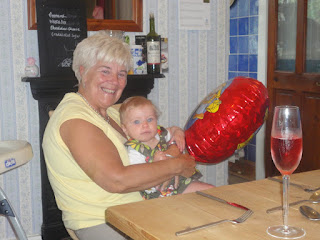 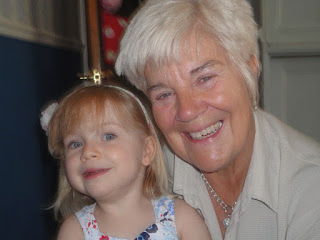 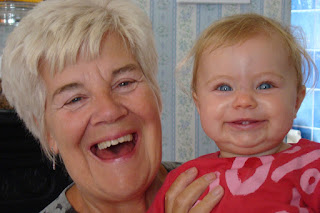 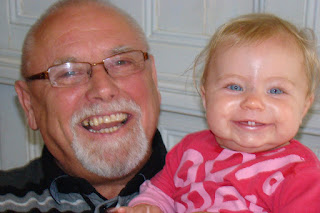 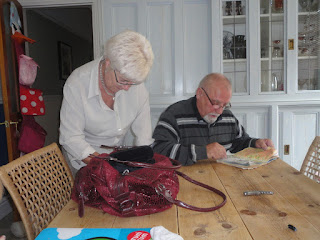 This is them planning a route back. Ray likes to 'bimble' back avoiding the motorways. Most bimbles lead to Whitby and the Magpie cafe, this time was no exception. Ray had been crossing his fingers that he didn't get a text from work and it seemed to work.

Last entry in the guest book, my beloved sister Becky. Freya's absolute favourite Aunty. Last time Becky stayed, her and Freya even ended up having a sleepover in Freya's room. We had a cracking time. Becky has a new personal trainer who has really motivated her, so it was nice to exercise and be a little bit healthy during her visit.

Our first evening was spent going for a run at the gym, DW in Blackburn (dire), and then popping next door to watch 'Bridesmaids'- a chick flick that wasn't disappointing. It was lovely to go with Becks rather than us having to blackmail men folk to go with us.

I worked Wednesday night after Becky had spent some of the day leisurely trawling the charity shops in Darwen, picking up a couple of books for Freya. It wasn't too bad as I managed to swerve out of working Thursday night and Craggy loves Becky's company anyway.

Thursday, Becks went fishing with Dad, as is usual on her visits. We all congregated in the pig room at seven once the kids were down, normally this would be wine o clock but Becky wanted to go for a run. I decided to join her and keep her company, by that I mean fall way, way behind. It was lovely running around the Entwistle reservoir in the early evening, shame about the clouds of midges and the stress incontinence. We had ummed and ahhed about taking the dogs but we were actually glad that we did as they both had a good run about, especially knowing that they would have a day at home while we went to Manchester next day. We stopped at Sainbury's on the way back to buy beers. My Nastro Azzurro was all the more yummy for being 'earned'.

Apart from having to rush for the train, Manchester was great. I didn't get to buy any clothes but I got a mini makeover at MAC and we got to have cocktails at our favourite place, see picture below... not as lush as when we are child free but a treat never-the-less. 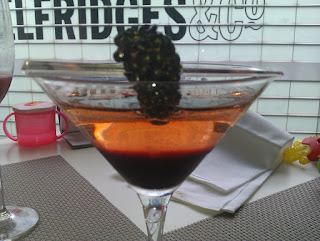 It almost feels strange when we don't have people staying. This post would have been a lot easier to write if I had done so as I went along. I had to wrack my feeble brain quite a lot but it's nice to have a record of our recent visitors...here's to many more.
Posted by Herding Cats at 22:49 No comments: