This post is named after the incredibly funny character from 'Psychoville', a drama by the lads who did 'League of Gentlemen'. He is a dishevelled, down-on-his-luck, grubby clown who gets embroiled in a sinister plot...very endearing. Craig and I love it. 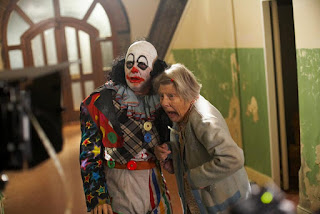 Anyway that aside, it is just an introduction to the post really (do check it out though). A couple of months ago I bought some cheap jelly molds. I had this in my mind... 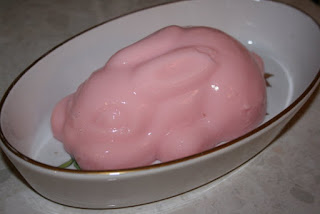 A retro 1970's bunny blancmange that the kids would be in awe of, entertained for a gleeful few minutes before tucking in. This is what we ended up with... 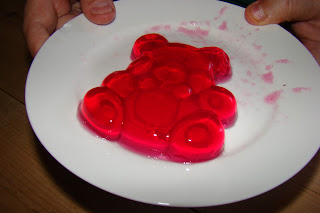 We played Freya some footage of Harry Hill's piss take of Heston Blumenthal on Youtube, the stuff where he wobbles the Jelly with Wipeout by the Sufari's playing in the background. She seemed to dig it. Craig then made the mistake of removing the teddy's head to give to Edie. She was most distressed, her main complaint that "He can't smile, where's his smile gone."

Cue mummy with ice cream and writing icing to rescue the situation. 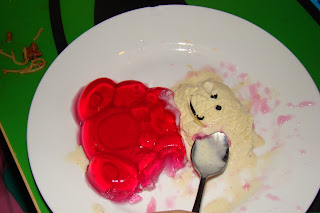 Incidentally, both girls hated the texture of the jelly, so we won't be doing that again in a hurry...Bollocks.
Posted by Herding Cats at 21:51