With families living so far apart these days, getting together is a rare and precious occurrence. We have just had a great mother's day weekend with Mum, Dad, Becky, Steve, Sally and the kids.

It started out that Becky was going to bob down one weekend. Due to 'set' nursery days, I basically fulfill all my 25 contracted work hours between Wednesday night and Sunday day. When Becky said that she would be catching the train down on Thursday, there was nothingelse for it but to book a week of annual leave. I never thought that Steve would come up for a weekend, knowing that it is a long journey from Chislehurst especially during peak times on Friday. Happily, they all made the journey.

I spent Thursday furiously cleaning while mum took care of Edie and Freya went to nursery. I spent three hours cleaning what we call the 'pigroom'. The 'pigroom' was a term we used to use in 'The Barn', our house when we were younger. I think it was becasue it was the kids sitting room and mum had pictures of pigs on the wall and the name just stuck. The new pigroom is our breakfast room. It gets a lot of wear and tear. I ended up scrubbing the floors, washing the doorstops, painting the walls and making some Easter decorations. It was worth it in the end as it looked lovely and clean and we spent most of our weekend hanging out in here, eating and drinking tea. 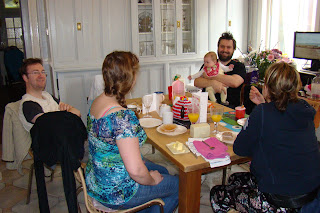 About tea... Craig, Steve and Becky are prolific tea drinkers and I enjoy the odd second cup. There was only one thing for it, buy a large teapot for the upcoming festivities. My total joy at anything retro these days lead me to buy a shiny, brown ten cuppa teapot ("Just like Aunty Mabel"). It only cost six quid and unlike various others I have bought over the years, it didn't piss tea all over the table, it poured like a dream, finally, 'function over form'. The money I 'saved' on a teapot went on a Cath Kidston tea cosie, I am in denial how much I paid for it but I love it and she does make things to last. Here is a picture of my excessively hardworking teapot. I quickly made the pot rest using a granite placemat and my liquid chalk pen after the pot left a heat mark on it's maiden brew sat on my kitchen table. 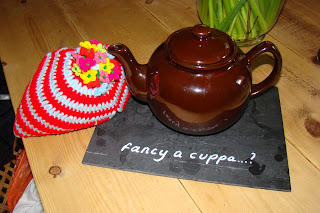 Thursday evening was relaxed with a few bottles of wine, a spaghetti carbonara and discussions of infidelity (no one you know). Poor Becky had been here mere moments when she was faced with a pile of washing to hang out. We finally got to bed after three am. Craig discussed the idea of 'throwing a sicky' but being a contractor and not paid for sickness tends to motivate Craig to go work.

I intended to do a bit cooking on Friday and some last minute cleaning, however, when you already have one guest and two small children, all that goes out of the window. The raspberry sorbet or 'rocking horse shit' as we call it, would have to wait. Steve and Sally arrived after we had settled the kids and polished off a chinese. We had a few drinks in the kitchen, amusing Cameron and Aimee with the odd photo that popped up on our 'slideshow' screen saver. Craig in drag went down a storm. 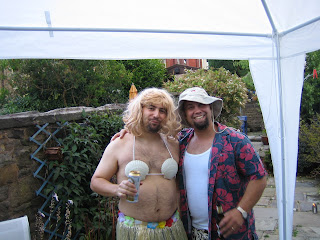 Aimee disappeared up to nanny and grandad's to stay the night while Cam stayed at ours for the first night. Ice cold martinis were served in front of the log fire whilst we all caught up. Late on in the evening Craig came in to admit that he had eaten a load of 'white chocolate shavings' off the kitchen side which turned out to be the candle that I had trimmed earlier. Perfect start to the weekend, shame it was nearly three when we went to bed.

Saturday was quite leisurely. We sat round drinking tea while the kids chased about, up to nanny and grandad's and out with the dogs. 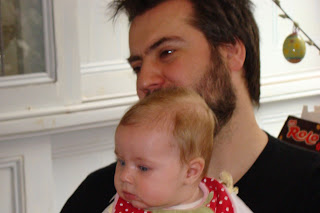 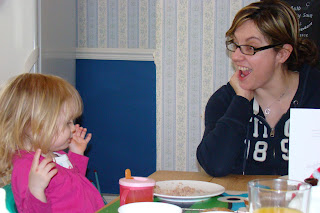 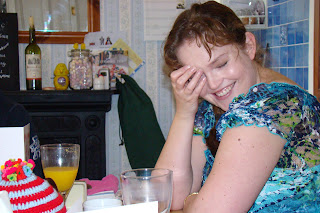 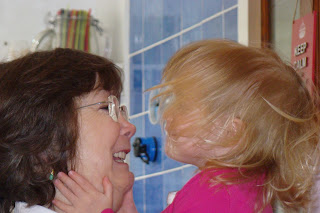 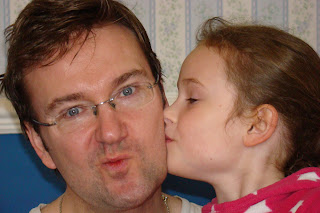 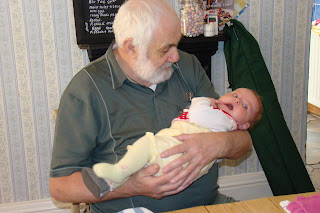 Preparing a Sunday lunch for ten was a little stressful because Craig was tied up in the kitchen and I felt frazzled trying to keep the kids amused and set the table. Note to self... get silverware polished before big Mother's day meal. Once we were all sat down, the stress abated, however, I was on my knees after dinner so Craig kindly put me to bed while everyone rushed about putting small children to bed and washing up. I awoke to 'Ironman 2' and some prosecco. 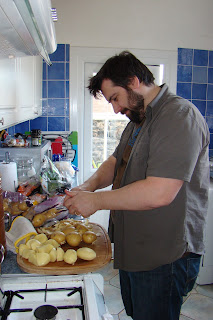 Supper involved cheese and biscuits and I fannied around trying to put some goat's cheese, caramelised red onion chutney and rocket tarts together. I bought this brilliant invention from Lakeland after a friend had recommended it and I love using it. It's the little wooden dibber that makes the tarts so easy, you just dump little splodges of pastry in and the dibber does the rest. 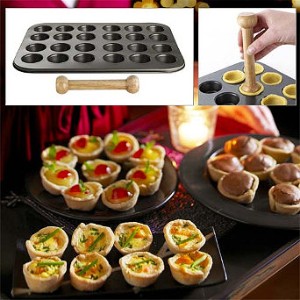 I would have been quicker getting them ready if I hadn't been attempting a gluten-free shortcrust pastry. I had just finished mixing up three different types of flour, potato, rice and tapioca (as per Phil Vickery's instructions) when I discovered I didn't have any cooking margarine... bollocks. Oh well, 'Flour Mix A' would have to go into buttermilk muffins in the morning. 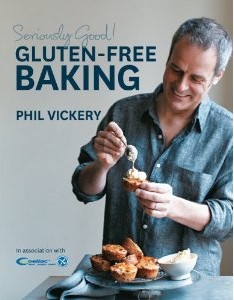 Sunday involved more relaxed sitting round sipping tea, I did a little bit of baking. We sent all our mother's day cards up to nanny by Cameron-mail. 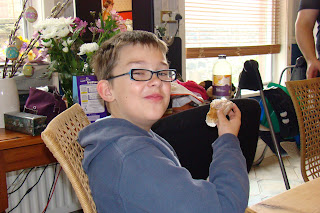 I got a two beautiful bunches of flowers, one from Craig and one from the girls. Craig's bouquet was absolutely gorgeous, just like you would see in a magazine, unfortunately they smelt like a nursing home managing to smell of urine and musty furniture at the same time. 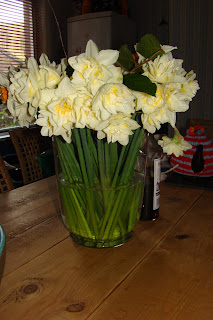 Sally got a beautiful card from Aimee, whose verse really made us all smile. 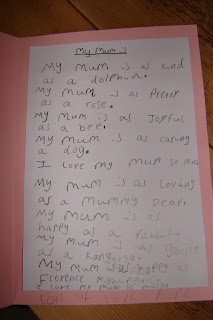 I didn't manage to get out of my dressing gown before the southern 'chapter' of the family departed in their rather flash, electric sliding door Mazda. We managed to get a nice group photo before they left which I usually forget to do. Me and Becky are still in pyjamas but you can't have everything. 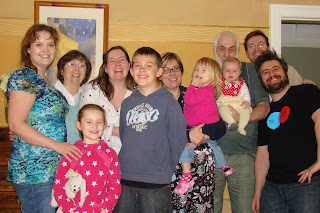 The rest of the day was whiled away with a walk in the park with nanny and all the dogs. Freya managed to bag herself a new toy that we wrestled out from between some rocks. 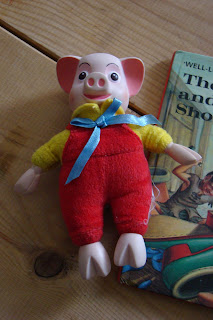 I think of this as the earth achieving equilibrium seeing as how we lost Edie's tiger in the park a few days before. 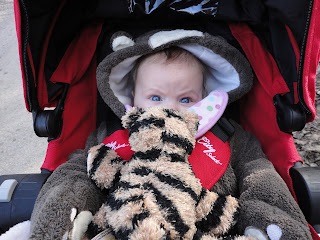 Back to earth with a bump. Monday has involved a coil insertion for me (ouch), vaccinations for Edie (ouch, ouch, ouch) and the loss of our beloved aunty Becky (going home, not dying) who Freya has become really attached to. They even bunked in together last night. 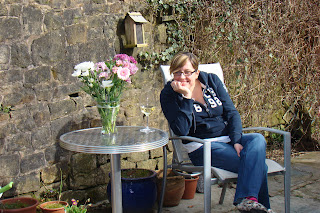 Life returns to normal.
Posted by Herding Cats at 22:52