After I said that I was going to find time to do a run ... I did. There is a low point of the day, when the kids have just gone to bed, the ringing in your ears stops and the pace finally slows down. I always feel exhausted and need to have a restorative glass of wine. When the slump hit on tuesday, I dusted off the running tights and t-shirt, put my sports bra on- my boobs promptly exited over the side and under my arms (must buy one three sizes bigger) and headed down to the gym. It was very hard, my maximal heart rate was 170bpm and my arms were aching in what I can only imagine is an angina-y type way. Cooling down I couldn't get my heart rate below one hundred but we all start somewhere.

Currently, I am running five minutes then walking five and so on as per the instructions in my 'marathon class' book. It's basically a book that is adapted from a university module taught in one of the universities in America. Basically, they issued the applicants with a mini plan that would get them up to jogging for thirty minutes then they all started at a similar level. Then, they did four runs a week, one short, two medium and one long. The theory side was split up into physiology of running and the psychological aspects behind the mental training required to run a marathon. A really well rounded programme. I have done it once before to get me through two half marathons. Here is a shot of me, Sharon D and Dian, my Milton Keynes half marathon chums. This was the Preston 10K which we used as a warm up. 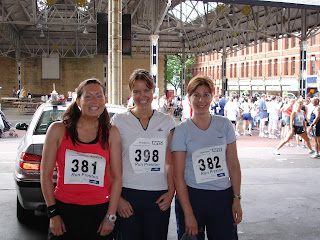 It gives me a confidence to know that following this plan, everyone who took the course achieved their goal, even older people, those in remission from cancer and some who had never run before.

It felt good to be at the gym. Treadmills have come a long way in three years. The one that I chose had a TV screen, ipod dock and a fan. Totally unnecessary as distance running is a bit about hardship and escapism not technology but I am shallow and did like the fan. The changing rooms were classy and clean. The only shame is that the sauna closes at nine which is too early for me to catch it, maybe if I get a baby sitter sometime I will be able to partake and burst some capillaries on my face.

When I returned home, I felt about ten years younger and so much better than if I had had that glass of wine. Just need to keep it up as there are so many demands on my time I don't know what to do first mostly. The weather has been so good I have started my garden bench project and want to get that finished so I may need to skip the gym just for this week... is that a slippery slope? 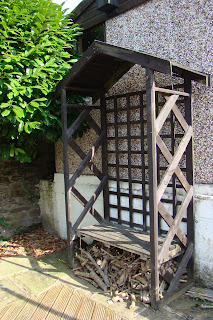 Here it is in it's old and busted state. I hope to have a lovely 'make do and mend' vintage inspired bench soon.

With the money I saved on a new bench, I have spied some things that I could treat myself to as a reward for continued gym attendance... 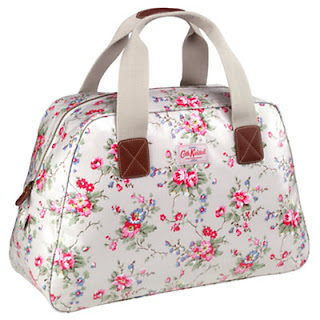 In unrelated matters, Freya made us smile today. Craig had sprayed me with a hose whilst watering the garden, I shouted "Oh Craig!", five minutes later Craig got Freya and she repeated the sentiment "Oh Craig"... I guess you had to be there but it was amusing to us, her looking so grown up in her new shades hollering her dad's name. Maybe my dad describing his Jeep as driving like 'Shit on a blanket' rather than the proverbial 'Shit off a shovel' will raise a chuckle. Must go to think about upcoming plans to get Olympic tickets.
Posted by Herding Cats at 22:24