It seems a shame to always write about Freya when Edie is doing some really interesting things at the moment. Edie is now rolling from back to front and back again, she actually laughs whenever tickled under her arms and she is really having a good stab at talking. Craig is also impressed by her new found ability to eat. Gone are the days when we would smear food on the roof her mouth, now she comes at you for the food and chews it off the spoon, 'like parents, like daughter'. She seems to be thriving, moving into 6-9 month clothes already and I think she is probably teething. 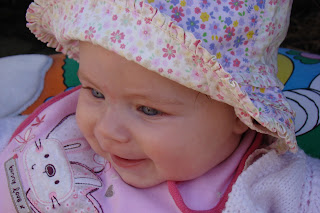 It just feels like a real shame for her because when Freya was this age I was sat with her helping her to sit up but Edie just gets laid down on a blanket or put in a ring while I try and contain the whirling dervish. This is her current parking place in the garden under a gently swishing bush with a few trinkets tied in the branches. 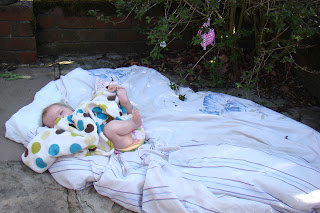 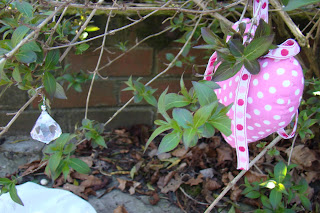 However, she has got the advantage of having a mini role model and you can see the hero worship already.

One of the lovely things about Edie's age is her total appreciation and enjoyment of toys that you give her. She beams when in the presence of Sophie la giraffe or her new best friend 'Chat le Blanc'. 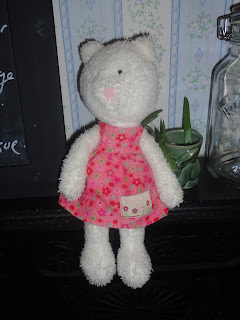 Don't ask me why all our toys have french names it just happened that way. Freya is much more hard work as she develops her own personality and enjoys exerting her will and negotiating.

Freya's toilet training has been a dream. She is now continent for days on end and it is usually my fault when we have accidents because I haven't seen the signs. The signs are pretty obvious... she sits and chants "don't wee, don't wee, don't wee" under her breath. I think the repeated prompting to toilet is driving us all a bit crazy. Freya trumped at the table the other day, I said "what do we say when we trump?" she replied "do you need a poo?". Unfortunately, that is what we say when she trumps, I was hoping for a "pardon me".

Freya has developed a real love of nature apart from constantly picking flowers in the park, much to my embarressment, here is a daffodil that succumbed while I was looking the other way on one of our walks. 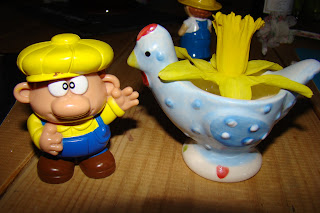 Included in this shot is farmer Giles, a little figure that goes all over with Freya at the moment. You are guarranteed to get a smile out her if you cross your eyes these days. She has really enjoyed gardening and was helping her dad plant pea plants at the weekend.

Freya's take on the world is still amusing. We were insect watching the garden when we saw a bee on the Lilac tree, I said "he's taking a bit of a rest" she frowned and moved away "don't spit on my vest". And quite randomly the other day she saw a picture of a pig and asked where it's necklace was. I discovered one of her books that included farm animals with flower necklaces on a few days later. She maybe quirky but she's always right.

She has a pair of navy striped leggings that aunty Becky said made her look like Burgular Bill. She now wants "Burgular Bill legs" all the time now. She also has a particular love of her fleece, it is a bit like a comfort blanket. The fleece can be seen in these photos taken to show daddy what happens when mummy has to deal with the internet shop delivery on her own. At least it's only Nivea. 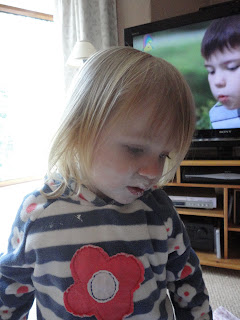 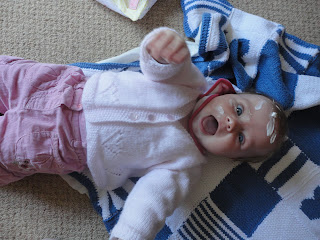 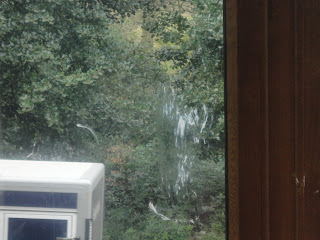 She is becoming more adventurous in the playground. She runs across the chain bridge and flies up the steps to the slide now. Hopefully she will be fearless like her cousin Aimee who we learned tonight has a plaster cast on for a fractured wrist. When we went to a 'Go Ape' in Grizedale, Aimee was desperate to go on the high wires but sadly, was too short. 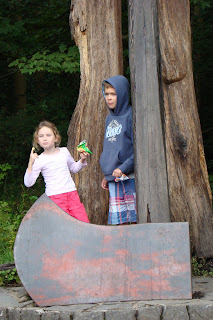 I am hoping that Freya will have mastered peddling her tricycle by the time we all go away together in summer. I bought her a new bell for her second hand trike to get her interested. I may just attempt this as well. bicycle-bucket-tutorial.

Nursery is going really well, she loves her keyworker (sounds like an inmate) Briony and the feeling seems to be mutual. We pay a crazy amount of money for this childcare and still I get homework. At easter there is an easter egg hunt and an easter bonnet competition. Easter bonnet -check. 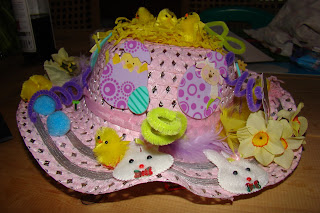 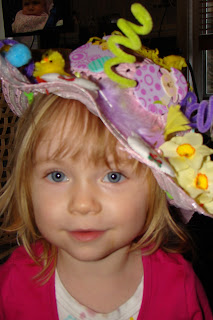 I actually cheated and this is a shop bought kit which me and aunty Becky put together one afternoon at nanny's. It is pimped somewhat with extra bits bought for my Easter decorations. Unfortunately, there is a garden party for the upcoming royal nuptials which I have to make a king or queen costume. Thank heaven I bought this book recently. 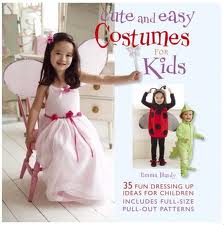 Ah well, it gives me an outlet for my creativity.

I can't talk about the Chambers girls without mentioning Moomin. Unfortunately, she seems to have fallen to the back of our list of priorities. Her walks are nowhere near as good as they used to be now that our walks are short enough for Freya to manage. I was considering 'outsourcing' and getting a dog walker in for a couple of days a week just to improve things for her- but funds won't allow at the moment. She still has a grand old time getting covered in crap on our daily bimbles round the park. 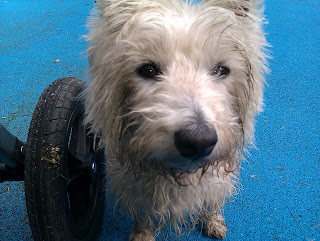 She never wants to stay in during the day, she is too busy eating bird seed off the floor. We have made an attempt to attract more birds to the garden this year, successfully, I might add but the downside is that Moomin is hoovering up fallen bird feed all day.

It's got so late again. I am off to bed to read this and work out where I can get the energy to go for a run from.