It started so innocently... we had a nice spring day and I decided maybe Freya would like to play in the garden in her knickers. Simple. I set up a little potty station with bath mat, wipes and spare knickers and off we went reading 'Dora the Explorer' and playing with bubbles. (P.S. Plastic shoes, what a revelation.  After being filled with toddler wee, these mock 'crocs' can just be sluiced down and back in action seconds later.) 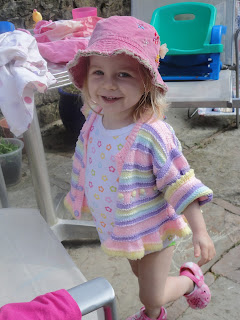 Little did I know that I had just started down a path that I couldn't return from. I had already read good old 'Gina' and knew that if you take the child out of nappies, you don't put them back in. You don't even 'poof out' and put them in pull-ups. It dawned on me that I was going to have to follow up with a week of 'training' which involves watching the child for unnatural quietness, saying "Do you want to go on the potty now?" 6 million times a day and cleaning up the inevitable accidents. I had to cancel a play date with Emily and Amelia, cancel plans with Nicola and keep her out of nursery for an extra day so we could crack it...bugger.

This is what my week was going to look like. We went through eight pairs of knickers on day one, I swiftly ordered a job lot online. Today is day five and we have had two pairs. 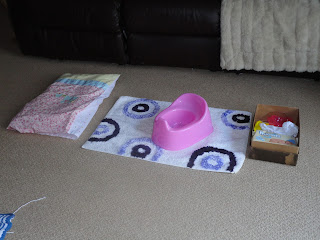 Of course I made Freya read the definitive text, enabling her to get with the programme. That morning I had absently muttered to myself "What would Gina do?" to which Freya replied "What would Jesus do?" hope that is not a sign of things to come. She certainly hasn't got that from home. She can carry on saying things like that, it might help her get into St Joseph's RC primary school (ten doors up from Nanny and Grandad's). I blame Nanny. 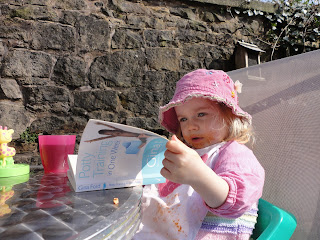 Luckily she has taken to potty training really well. On our second day, we went for a small trip to Nanny's and she managed to use the potty there but also had an accident (50% success is good enough in my eyes). She went back to nursery on day three. She only wanted to use the toilet there, compelling me to make a rush trip to Mothercare. Sixteen notes lighter, I came home with a Peppa Pig toilet seat insert and presented it to her like it was the best present in the world. She fell for that ... sucker.
Everywhere we go now requires us to take a potty and she has a 'coaster'. I mean a little cushion that has a plastic insert, lovingly hand appliqued too, I might add. 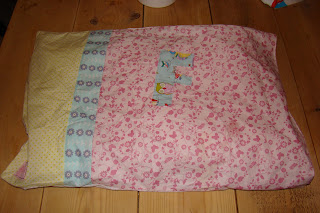 A bit of a work in progress. 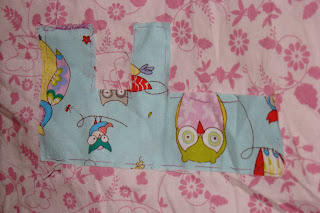 It has been easier than I thought it would be. After messing about for months, trying the potty every now and then, actually you just have to man up and take the nappy off. It is the end of an era but as usual it is exciting to move onto the next stage. Its also nice to see her in little vest and knickers rather than babygro type vests. 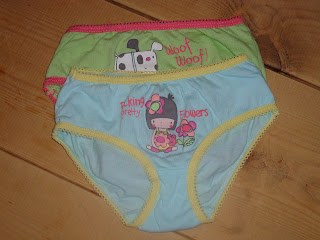 I think the memory that I will take away from this whole process is... toileting Freya every fifteen minutes with no joy for two and a half hours waiting for the on-line shopping to arrive. As the Tesco man knocked on the door she just started weeing on the carpet, luckily I have a sense of humour and I also had some lovely messages of support on Facebook from Jussie, Jade and Dawn.

However, I will also admit to having a consolatory glass of white wine at lunchtime on day two. 'Gina's week' is nearly over...Job done.