It was decided that before I returned to work that Craig would host a D and D weekend. Craig has played online Dungeons and Dragons for years, ever since I hammered the overtime one summer in Oxford to stockpile cash for our wedding. It keeps him out of mischief. 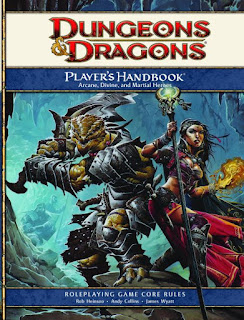 The players... Hannele from the Netherlands, Bert from Northern Ireland, David and Henry from Cambridge and Delphine originally hailing from France but currently living in Germany, play every week. On a Wednesday night at around seven, I lose Craig for a few hours. Playing online can, understandably, be slow. So it is nice for them to get together face to face and have a few beers, pizza and Stroop Waffles whilst adventuring.

I volunteered to vacate the premises, although it has always been great being here when the meet is on, I felt that trying to run round after the kids would be diffucult for everybody. Nic and Nick to the rescue. They offered to put me up for the weekend.

After packing for hours, high chairs, cots, two supplies of nappies, towels, I was beginning to think that it would have been easier to stay. All this stress was remedied with a glass of wine on the Friday night. We had some great food, king prawn thai curry, lasagne, key lime pie and my contibution to the weekend which was goat's cheese tartlets with rocket and caramelised onion chutney. We had long chats, went for walks, the girls played and we got to watch one of the twilight films. (which we all agreed was probably aimed at teeny-boppers but entertaining nevertheless).

We took a walk on the Saturday behind Nic and Nick's house where there is a great property called 'Thimble Hall'. Its a small stone 'mansion', very expensice too by all accounts. I love the way they have planted the bamboo either side of their back gate. 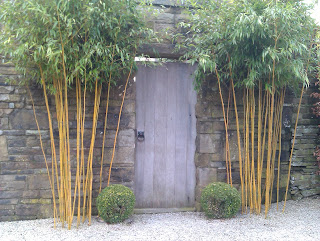 This is the grand front entrance. 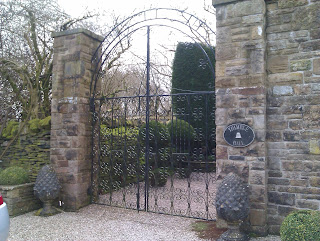 This graveyard is just tucked away behind the houses. There are some really old tombstones. Nic suggested that it would be great to bring the girls when they are older to do some rubbings. You can just see Elodie walking along the wall with her dad. 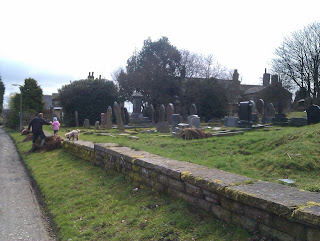 This is the girls dining outside on the Sunday, in the spring sunshine. In the rear of the shot is Nic and Nick's wood store that I am really jealous of. 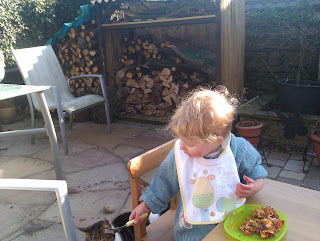 By the time I got home on Sunday, I was shattered. A weekend of telling Freya to share and putting her on the naughty step by myself was tiring. Craig made up for that by taking Edie to get her vaccinations the next day leaving me to enjoy a quiet hour in the garden reading, drinking coffee with a left over Stroop Waffle and watching planes go overhead in the perfect blue sky. 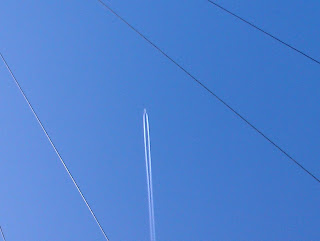 This mug was actually bought for Craig by Steve and Sally but I have commandeered it, because it is fine bone china, tea tastes really good out of it. You can also see my 'Mammoth Crocs' which I adore. I had a cheapo pair of fake crocs that I bought for £5 which I wore through... so I knew that the £32 wouldn't go to waste and these are sheepskin lined... toasty for camping. 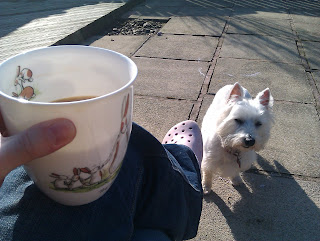 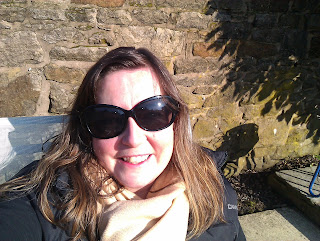