Just chilling out with a glass of cava listening to Elton John 'Rocket Man' after a really shitty day. Elton John was so good in his day but I struggle to think of him in the same way since he screamed "Vile Pigs" at either the paparazzi or some airport workers, can't remember. Saying that, I was in the garden screaming at Moomin this morning, not my finest hour. I must of looked like a fish wife.

I felt so down yesterday that I felt like going to bed just not to be awake anymore. I went to bed at quarter past seven without any tea. I knew that it would compound my situation as I needed to put washing on and do a Tesco order knowing that I had nothing for Freya to snack on the next day but I just couldn't bring myself to do it. It's probably the first year that I haven't made a bit of an effort for Valentines day, we don't really do cards but I usually try and make some fairy cakes or something. I guess it doesn't matter, Craig doesn't observe the day anyway- seems sad though.

I walked to the shops with the girls to try and improve my mood. It was on my mind to buy some cigarettes but I settled for some fresh spring flowers instead. I felt that the cigarettes would come in handy when I am admitted for in-patient psychiatric care, however, couldn't bring myself to smoke in front of Freya. I felt better by the time I had got up the road and was glad I had opted for flowers but then remebered that there was something about mixing daffodils with any other flower.

Good old Google. Apparently, daffodils secrete a gummy substance from their cut stems that blocks the phloem or xylem (it has been too long since I did biology) of the other flowers causing them to die prematurely. Solution: cut their stems and put them in water on their own for three hours before mixing them with your arrangement- job done. 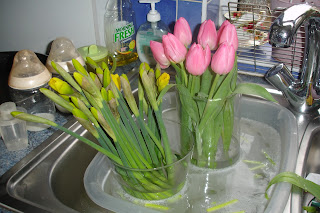 I shall see if I can find something on Spotify to cheer me up- Bill Haley?
Posted by Herding Cats at 14:27