Freya seems to have shaken off the misery and is back to her usual chatty self. She has a bit of a thing for T-rexes at the moment, prompted by mummy and daddy getting her a dinosaur birthday card, I presume. I was sat thinking the other day and in a vague manner said "Now what was I going to say..." she finished my sentence with "T-rex?", "Nope, that was definitely not what I was going to say, good guess though". Later that day I asked her if she wanted a cuppa to which she replied "Cup of T-rex?" "Nope, Twinings everyday tea, I think". 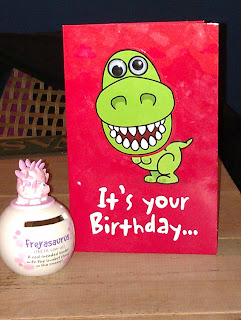 Today she found a pound in one of my many bags strewn about the house. She brought it to me and said hopefully "Peel it" I had to tell her that it wasn't chocolate money to which she replied "Freya's piggybank?"- she got the money of course because it's cute but not a habit I want to cultivate. Luckily, I don't have a lot of money lying around.

Along with feeling better, her screaming ab-dabs about Pan have calmed down, she is happy to see her when she goes to bed but doesn't want her all the time- Yeh.

Popped out for a quick shop to 'The Range' the other day. I went to get more plastic boxes to store the girls toys in. I am not sure if I am becoming more anally retentive as I get older, oh well at least the front room is tidy. Anyway, I ended up buying a few other bits for the house. 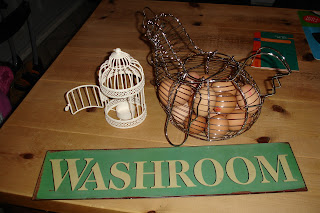 I have wanted an egg basket for ages. It was a toss up between ceramic or wire. The ceramic one was like the Boswell's in the eighties show 'Bread'. (We also had one at home when I was little.) I ended up settling for this metal one which I think looks nice and is more practical. The reproduction tin sign for the bathroom was a fraction of the price that you see on the internet for the real thing.  I will have to smile sweetly at Craig to put it up for me. I thought the birdcage could go with my thrifty sprayed bird on the mantelpiece - I would have liked a bigger one but this was cheap, cheap, cheap.
Posted by Herding Cats at 06:52