And then there were three.

It's Thursday, so Freya has left us to go to nursery, not without event I might add. She had a little paddy about not being able to have Pan. Craig is keen that she is not too dependent on Pan which I heartily agree with but I wanted some reassurance that we are doing the right thing.

I have had a look at some websites to see the advice regarding 'comforters'. It appears that it is healthy and necessary up to the age of two because the child is discovering that they are a separate person from their parents and it provides them with some support when mummy and daddy aren't around. Children usually loose interest by the time they are four, under their own steam but if a parent is seeking to reduce their dependence on it, then gradually restricting access is the way to go i.e. she has Pan at bedtime. So here is hoping.

Freya's nursery days are not the 'relaxing in a bathrobe, eating chocolate while reading' days that I would like but it is almost as nice to be able to get jobs done. Today, I have sorted out the big shop, cleaned out both fridges and sorted through all the toys littering the front room. It has been a case of things looking much worse before they get better. It is now lunchtime and the house looks like it's usual mess but it has taken me several hours to get it back that way.

These days are also an opportunity to catch up with Edie-peaches. I log on to the Baby Centre website in the morning to catch up with what should be going on with a three month old and games that we can play together. This week it is encouraging her to roll over on a blanket preferably naked and making a mobile out of leaves.

I decided that we could go for a walk in the park and see the leaves on the trees instead. I waited till she was awake and responsive- hooked up the dog and off we went. I think she enjoyed being parked near the waterfall and duck pond listening to the different sounds. 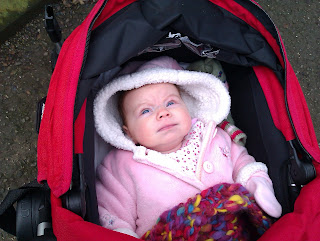 and we sat under some trees and the flag at the entrance to the park so she could see them. Apparently her ability to focus is fully developed now. 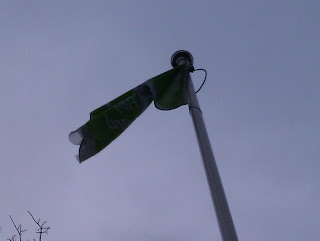 As an aside,we are now on the first day of not breast feeding, my chest feels like two bags of wet sand and they are mighty tender, hopefully, this wont last long. I will have a bath later to deflate my 'comedy chest'.
Posted by Herding Cats at 23:32