Sam's not had a lot of time lately, so I thought I'd fill in a quick update post in my work lunch break.

At 4am on the 28th of October 2010, Sam was woken from sleep by something she could not ignore - her labour had started. She busied herself for a couple of hours by having a bath and woke me at 6 am to tell me that she was having contractions every 3 minutes.

I called her mum to come and pick up our daughter Freya, and we got the room all prepared for the home birth. At 7 am with contractions now roughly 2 and a half minutes apart, I called the midwives. For some reason they thought that speaking to Sam was more important than me, but the upshot was that they would send someone immediately. Immediately in this case turns out to be after an hour when the day shift comes on - and who says that UK midwives are not dedicated?

Well, after such a delay they arrived and examined Sam to find her cervix at 6cm and totally thinned. They just had time to get themselves set-up and to discover that their rigorous planning for home birth did not seemingly include ensuring that the nitrous oxide cylinders had tubing to allow their use. So at 8.23 am after less than 4 and a half hours of labour and on paracetamol only, stood up clutching on to the blacking covered fireplace in our bedroom, Sam delivered our second child.

Welcome to the world to our new baby girl - unfortunately at this point sans nom.
A quick clean-up and shortly afterwards she was weighed at 3.42 kg or 8lb 6.5 oz.

Both mother and baby were healthy after the birth and once the midwives had gone, I made some toast and we settled down to watch Iron Man 2 in HD ;-)

We did eventually decide on a name and here it is, along with a picture... 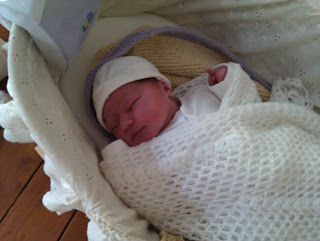