I went to call in on my friend Emily and her daughter Amelia on Monday. It's really nice to see friends with babies such as Nic and Emily because we always meet for 'elevensies'. A good cup of coffee and some baked products, then you can say your farewells and put the whipper-snappers down for their afternoon naps, catching 40 winks yourself. This was one of those occasions- I had brought waffles and syrup this time. Emily seems to be really stressed at the moment because on top of being a new mum and starting a degree module, they have given her some of my responsibilities at work. We joke that I will get it all back when I go back in March and she goes off to have her second.

Emily and Lee are currently having a porch built to enable them to park the buggy in there with its muddy wheels. The buggy problem was exacerbated because they have cream carpets throughout because they didn't think they were going to have children. I couldn't imagine Craig doing something like that. We haven't even got an exterior light at the front at present- some poor midwife is at risk of being scared to death by next door's creepy victorian children looming out of the darkness. 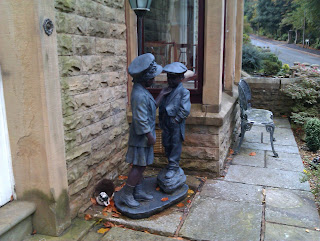 Freya loved playing with all the toys that weren't hers which was fine when it's a V-tech tree house but a little more embarrassing when it's an ipod touch and a pair of ceramic vases. We always said that we would would baby proof our child rather than baby proof our house but there are somethings that you just don't do with a toddler around, collections of ceramic vases precariously arranged on the cream carpet is probably one of them. When Amelia starts crawling, I will be relieved. After giving me a few helpful tips about nursery vouchers and NHS discounts at the nursery where Freya will be starting- I said my goodbyes. She has promised to text me regularly to see if I'm in labour to piss me off just like her mother-in-law did to her.

I had another girly date on tuesday. I was meeting some girls from work for lunch. Our merry band consisted of Fran, Lisa and Charley and Lisa and William. I turned up 40 minutes late, probably a record for me. We were meeting at Huntley's farm shop and restaurant. A place that I had never been to. Armed with my AA route map, I managed to go to the opposite end of the A59 nearly eleven miles off course, just outside Clitheroe. Oh well, beautiful countryside to get lost in.

Freya was asleep by the time we got there. We had a lovely meal and catch up without talking about work. Freya was really well behaved, helped by a large portion of chips and a small medicine cup full of ketchup to keep her occupied. We had a little mooch around the farm shop which seemed pricey but I would definitely go back for a closer look when not carrying a struggling toddler. They had some things that looked good for Christmas- posh cheese biscuits etc. When I left, Lisa, my old ward manager said that I better have had this baby by the next time I see her- I am sure I will, because she still scares me. 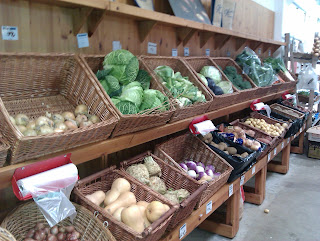 Craig had been off sick from work, so me and Freya getting lost in the Ribble Valley for the afternoon was a bit of a boon for him. Peace and quiet. I took Mooms out round the park and Freya on the swings before collapsing into Freya's bath. Craig kindly did the nighttime routine and then started wrapping our eBay parcels. This worked out nicely as my back pain was really bad by this point, so much so that I started to vomit. I took my birthing ball downstairs and had a bit of a bounce before starting with contractions. Sadly, everything settled with a glass of wine and going to bed three hours later. I did get to try out my contraction counter app for my smart phone though and I managed to tidy up the kitchen before retiring.

After all the drama, I could have done with a restful day but unfortunately I had beauty appointments. Lisa, the girl who does mine and mum's nails was coming over at  10.30. I had booked in for a pedicure- lush and a bikini wax- urggh. I don't think Lisa has had training, despite the fancy folding table. Painful doesn't cover it and I have ended up with a 'hair-do' that is wider than it is tall, very odd. Beauty treatments all done at least. I'm just relaxing in my lovely bed, blogging now.
Posted by Herding Cats at 17:48