The rest of my week.

After 'crying-through-dinner-gate', my lovely sister sent me this beautiful bunch of flowers.  I feel a bit of a fraud as there really is nothing wrong. Nothing that a four hour labour and a cocktail won't fix anyway. Thank you Becks. 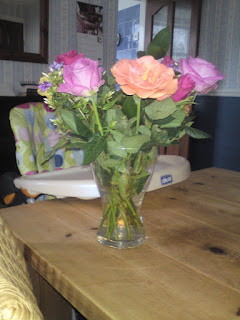 Wednesday night is Craig's night to play 'Dungeons and Dragons' which always leaves me with a bit of free time. I decided to fill it by finishing off the ironing whilst watching old episodes of Jonathan Creek. My brother Steve, had perfect timing and phoned just as I put the first pair of pants on the board. He rang to let us know that he had passed this mad professional exam that he had to do. Unfortunately, he needed to spend a lot of time revising while we were all away together in Carnforth. Worth the agony now though. If he had failed he would have need to resit the whole course which has been made harder as I understood it. Jammy git. I did manage to do the ironing in the end.

Thursday morning was heralded by Freya Squawking loudly. I should have known it was going to be one of those days. She was mischievous all day. As fast as you could put something back that she had grabbed, she had grabbed something else, namely my stack of tea towels dumped in favour of eating cereals out the box. I walked her all the way round the park and made her walk up a large flight of stairs up from the waterfall. Feeling pretty smug- I put her to bed thinking 'see you in two hours kid'. Unfortunately, I had made the rookie mistake of not waiting for her to poo after her lunch. One hour later she was singing in her cot- poo up to the eyeballs. One of those days when I was so glad to see Craig at half five. How do single mother's cope?

So after a fraught day, we relaxed on the couch with man's best friend. Only  we discovered that Mooms now had a new best friend crawling through her fur. We only found one of what ever it was but it was enough to get us off the couch, Frontline, worm her and put her in her basket before she knew what was happening. Hopefully, that will be the end of that saga. There is always a bit of shame having to tell others that you found a flea on your dog, like informing previous partners that you have syphillis.
Posted by Herding Cats at 22:00