I had decided that I hadn't done much cooking for Freya recently, so went through my Annabel Karmel cook books and drew up some menu plans. The first of my experiments was a boiled egg, which I have never attempted to cook. We don't even possess an egg cup... a Jack Daniels shot glass it is. 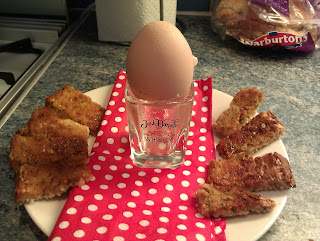 Freya was a bit freaked out about the whole egg thing and to be fair it was 'snotty'- practice makes perfect. The afternoon was more of a success. I made oat and raisin cookies to have with milk. I didn't have any wholemeal flour so used Spelt flour instead- good news for my brother Steve who is gluten intolerant. These turned out really goey and lush and so easy to make. 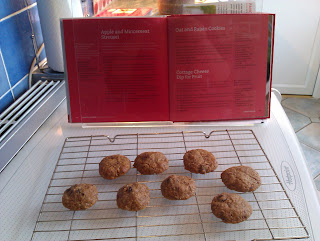 Nicola texted me this week to let me know that the reason Elodie was out of sorts was that she had Measles, and suggested that I get checked out. After speaking to the midwives they said that Measles was really very rare and unlikely to cause me a problem at this stage. It could be 'slapped cheek', which is a viral illness and I would benefit from having bloods taken for Parvo. Hopefully, my back end won't go and Craig won't be forced to have me put down.

After having a couple of days that revolved around Freya and Mooms, I decided to go to Dunhelm Mill with mum to find some bookends. A 'girly' shopping trip, but all we came away with was this egg cup. 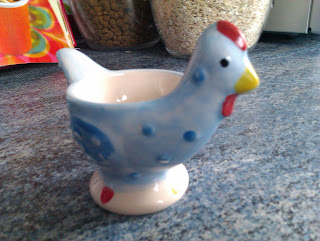 We also popped into Hobbycraft- where you always end up spending a fortune on things that you don't need. I got some craft paper to make Freya a name plaque for her door and ended up getting an autumn wreath which I added some little glass toadstools to. A nice distraction from all the other crap that I need to do. 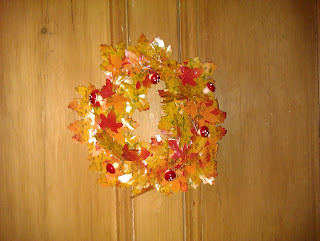 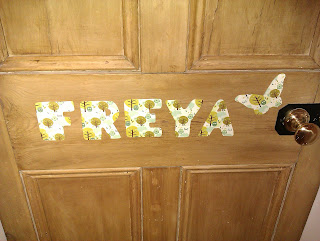