I am posting whilst the gas man fixes our boiler. The shower has taken to cycling between hot and cold every thirty seconds just to keep things fresh in the morning. If he wasn't here I would be sleeping...boo hoo.

Freya and I had a nice day yesterday walking to feed the ducks etc but my stomach was rock solid all day. Craig was late home from work, so I ended up bathing Freya and I couldn't even bend in the middle. I used one of Freya's toy chairs to sit at the side of the bath. I must have looked like a circus elephant on one of those tiny clown bikes. The discomfort knocked me off my food, which is absurd for me. I managed to rally in the evening and cleared out my wardrobe in attempt to prepare our bedroom for being birth central in a few weeks time. By the time I got to bed at half eleven I was having regular Braxton Hicks which took a couple of hours to go. My body trying to tell me to stop being so anally retentive with tidying and organising the house I guess.

I wanted to write a post about I.T.N.G. In the past two weeks we have discovered the joy that is 'In the night garden'. It's a show in which nothing happens to various characters and then the nothing that happens is fully recapped at the end. This means that the show is actually half an hour long. When you feel ready to fall over with exhaustion, half an hour of dribbling whilst laid on the floor is very restorative. She only gets to watch one a day- so far. You have to restrain yourself from putting more on and actually getting some free time!

It's a little bit weird but captivates children of all ages. It must be bona-fide, it's narrated by Derek Jacobi. Iggle-Piggle is the central character. Freya asks us to 'Phone Piggle' which means to put an episode on (she thinks the remote control is a phone, despite being able to distinguish a mobile from an iPod- go figure). After Piggle has traveled to the night garden, he gets the option of riding on the 'Ni-nonk' or 'Pink-onk' as Freya calls them. She knows the name of all the characters and joins in their little dances.

We now possess are range of merchandise... plastic Makka Pakka helps wash her hair in the bath, she has books, soft toys and we get the magazine that gives you a free crappy toy every two weeks. This little phone is this fortnight's offering. Like father like daughter. She used her lolly stick to  dial the numbers, she's obviously more used to smart phones with a stylus. 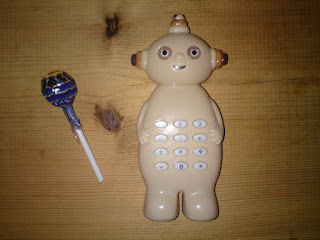 Working through the magazine with all it's activities does keep her very happy. It is terribly frustrating watching a toddler colour outside the lines and put the stickers on haphazardly but I'm working through my issues.

The boiler is fixed, hurrah. The shower looks super inviting- really steamy like at a posh gym. I may avail myself of the facilities later when madam is in bed and I am not leaving her doing mischief without supervision.
Posted by Herding Cats at 14:20