Frustrating times at the antenatal clinic.

I went to the antenatal clinic on Wednesday as planned only to be told, 'to make a decision on the home birth I would need another scan to see the progression of the fibroids'. Could they have a quick look there and then? Of course not. I would need to come back for the scan and another consultant appointment on Friday. It doesn't seem like a big thing going to the hospital ten minutes down the road. However, when you are desperately trying to time sleeps, nappy changes and food for a toddler it becomes more of a headache. Attempting to keep her busy for more than fifteen minutes is also a bit of a nightmare.

We came back on Friday armed with a small bag of toys and snacks. We got there at about twenty to eleven for our appointment at eleven. I was scanned at ten past...good, good. I was hoping for a really good look at the baby but counter-intuitively the further along you are the worse the scan is because there is no room for the baby to thrash around. The baby was head down with it's back to us, not worth even asking for a four quid print out. The good news being that the fibroids aren't blocking the exit, they are unchanged in size and remain small. Freya happily munched on raisins in the corner throughout.

We then went back out into the clinic and waited an hour and five minutes to be called through. The thing was, nobody else seemed to be called through either. It was like the waiting room for the afterlife in Beetlejuice. It's a shambles of a clinic. Freya by this point is hungry and antsy. I decided to get her out of the confinement of the pushchair to give her a break and found her to be wet. They have no baby changing facilities in the clinic and I wouldn't have been able to hear my name called anyway. So, tough luck kid.

When we finally went through I was seen by a lovely health care assistant  who wrote my name down and went to find me a consultant, this took another thirty minutes. I had brought lollipops to keep Freya quite during the consultation and we were now on our second. She was sticky and hyperactive. The consultant finally arrived and asked if I had been waiting long. I was very British and just said 'Well, yes' with a smile!

Anyway the upshot is that the fibroids are, in her words, 'minuscule'. She couldn't understand why they had asked for a scan but confirmed that there will be no problem with a home birth as long as the midwives agreed.

Margaret, the older midwife who had seen me last,  had been quite abrupt which wasn't encouraging. We had met her when Freya was born, she told us that Freya looked like a canary and shouldn't have come out of hospital so soon. 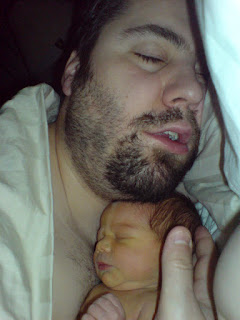 We had taken a bit of umbridge at the time. Looking at this photo, we were in a bit of denial. In hindsight, you would rather have a competent practitioner who doesn't sugar coat things than a lovely but vacuous midwife. Enter Kimberley.

Kimberley taught our antenatal classes last time. She maintained that babies breathe under water (instead of instinctively holding their breath- as we all know) even when one of the other father's jokingly asked if babies have gills! She also had no idea that epidurals could become infected. However, its her general lack of sense that is so disturbing. When she did a home visit, she did a eight or nine point turn in front of our house (in her Micra that was adorned with big pink heart stickers). Everybody else in the world reverses round the corner into to one of the many side streets because the road is so narrow and busy. Bring back Margaret.

Apparently, Margaret had actually been very positive in the notes, about my suitability  for a home birth. So, I have been given the green light. No new weekend bag for me. I have packed my hospital stuff into an old changing bag. 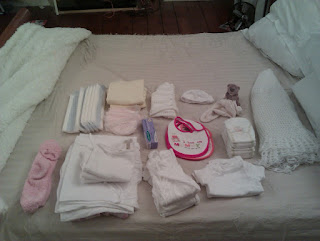 Next jobs- buy angle poise lamp, charity shop bedding and plastic sheeting from B and Q.
Posted by Herding Cats at 07:46