Craig had decided to take the morning shift again, thus giving me a break from breakfast and dog walking. Once again, it was a beautiful day for coffee in the garden.

Dad had taken the caravan down to Newark yesterday, to see all the family down there. It is going to be a busy weekend there as Cousin Nicola is having her baby induced today. Dad will have removed himself to a fishing lake at a safe distance though. Dad being away means that mum is stranded without a car.

Although we actually live in Darwen, you need to be very fit to make it up the hills from town without motorised assistance. I would like to brag that I once made it up Borough road carrying a giant pumpkin but that was in my twenties. We had errands to do in town, going to the post office and the library, so invited mum along. A productive trip really, managed to get Freya an emergency outfit to keep at nannies for times when nappies just aren't man enough, sorted out posting Becky's tablets and paid my library fines. Nanny bought Freya a toy turtle that she was convinced was a monkey with a hat and we also got a copy of 'Green eggs and Ham' for the bedtime story from the library. Dr Seuss really doesn't make sense but kids love it.

We had a little pootle round the market and found that there was a 1940's event in Darwen this Saturday. 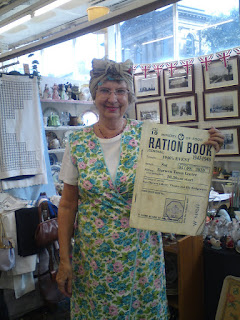 This woman was running the bric-a-brac stall. On asking us when rationing stopped in Britain, I was ashamed not to be able to guess. My mum was two years out by saying '1952' but in actual fact it was 1954. The woman had put together a display showing the quantities of food allowed under rationing. 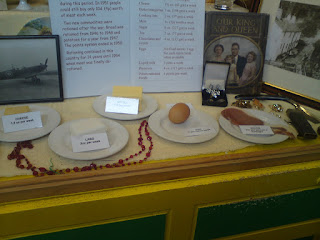 Three rashers of bacon...absolutely crazy. It looked like what Craig would use for one meal. I think it would be so interesting to try and manage on rations for a week. In reality, you would need extra support and information like when Giles Coren and Sue Perkins did their 'Supersizers' show.  As far as I understand it most people had an allotment and maybe a chicken to bulk out the supplies. We don't even have a deformed carrot from our garden this year. Incidentally, this photo shows a picture of the spitfire that people of Darwen 'clubbed together' to buy for the war effort. This type of thing makes mum mad. The poorest people give all they can, while fat politicians waste the money elsewhere. Luckily, there was a raving lunatic shouting at us, 'to open the bloody door' for him to distract her thoughts. Mum then bought some fish for her lunch from a stall that had the amusing tag line 'If it swims... we can get it'. That tickled me.