The soft play centre turned out to be a bit of a nightmare...36 weeks pregnant, chasing after a toddler and leaning into ball pools etc. The thing was, if you needed to do something like get a high chair then you had to carry Freya with you otherwise she was just bombing off and jumping on the bottom of slides and generally putting herself in harms way. We had fun but I certainly paid for it.

When we got home, I put Freya to bed and my back was aching so bad I had to get into the bath. Unfortunately, Freya wasn't for sleeping- 20 minutes later I got out, and dripping wet, changed her pooey nappy. Back into the bath. Freya was still shouting because I had left Madam Lapin (Pan) at Nic's- big mistake. 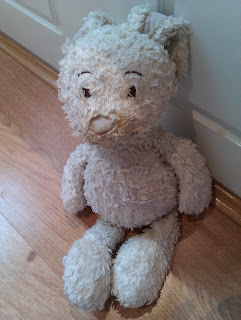 This stinky rabbit with a brown face is Freya's best friend. We had tried to avoid her having a special toy because we have heard lots of stories of real grief when they get lost. However, Freya formed this attachment all by herself... you can't control everything. Maybe it is better to have loved and lost eh? Aimee, Freya's cousin has several rabbits, kind of like this one. She can tell the difference between them all, in case anyone thought the solution was to buy in bulk and substitute rabbits when needed. We have tried to limit Madam Lapin's outings to reduce the risk of losing her, so we have other toys for out and about.

After about an hour, I got out of the bath again to try and settle her, only to find that she had wedged her legs through the bars. I gave it up as a bad job and decided that she could come and sit with me in the bath and have a play.

Unfortunately, I needed to drag my watery carcass back to Nic and Nick's to get 'Pan'. I got a free cup of tea and slice of cake for my troubles and Nick helped me load up the car which was lovely. On return to the house, Craig had managed to shake some of his hangover off, so was charged with sorting Freya's dinner and bed out. While I ran another bath.

I was starting to get concerned at this point, the back ache was worsening, my stomach had tensed up and my undercarriage was aching (too much information maybe) I thought this could be the start of something. I desperately hoped not as being early naturally means that I would have to go into hospital. I stayed in bath another hour, got out and went to bed. Craig brought me some buttered crumpets, green tea and a hot water bottle. Three hours and series two of Phoenix Nights later... all was well. No more soft play for me.
Posted by Herding Cats at 10:52