Friday was dad's birthday, so despite it being a 'lie-in' day. I got up at about quarter to eight to make him a cake. This chocolate cake is super tasty, light and easy to make but it contains 150mls of sunflower oil which seems weird. I did get it from the Good Food Website though. The birthday cake was a hit, after three attempts we taught Freya how to blow the candles out...she'll be all prepared for January. 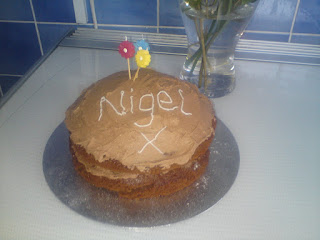 Mum gave me a magazine  article about avoiding emotional meltdowns, one of the twenty things it suggested was, 'find a cake that you can bake well and never cook anythingelse'. This is mine. Sometimes my baking goes tits up and I always blame the oven. I am convinced that our oven heats the room rather than get to the right temperature...this could all be rectified by buying an oven thermometer but I never quite get round to it.

Baking also means that I get to use my favourite gadget... no, not an iPad or Kindle but my KitchenAid mixer. You aren't somebody until you have one of these. Craig bought me mine because I don't think I could have parted with the money- but I do love it. Craig also bought me a KitchenAid spatula and Martha cookbook- fantastic. I do feel rather bad that I never have such inspired ideas for him but he's a man who knows what he wants, he's usually researched it and bought it at some random point in the year, what can I do? 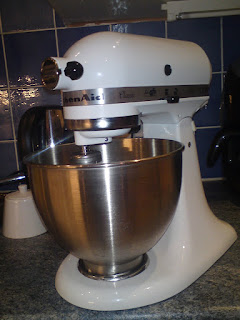 On Sunday, we took 'the girls' for a walk to Sunnyhurst woods. There are three main parks in Darwen, Bold venture, Whitehall and Sunnyhurst. It's nice to take them somewhere different to Bold venture. We ambled past 'The Olde England Kiosk' where we got married. 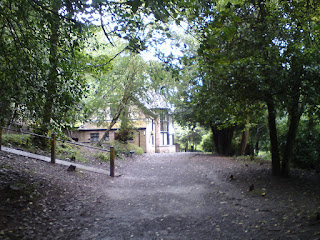 The weather was slightly better than the rainy day we had in November. It's a nice park, much less structred than Bold ventrue. It has this lovely bandstand which is unfortunately falling into disrepair- but the whole place looks great now that the leaves are turning for autumn. 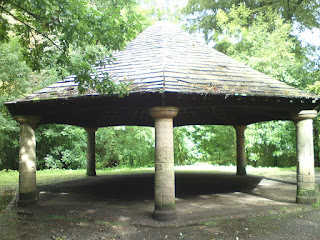