Ten to nine...absolutely pooped. Just finished loading dishwasher and sorting washing. Craig is cooking Spag Bol. Bizarrely he is watching Bridget Jones: The Edge of Reason while he does this (now he's decided to 'man-up' and watch Fight Club- more like it). Craig is so sweet, he is cooking Spag Bol knowing that I will be able to eat some tomorrow night while he is out on the razzle. Probably a good thing because I would only eat a bowl of cereals otherwise.

Freya's bedroom is coming together nicely. The plan is: I will hoover and wash the carpet, then stock it with her toys and books, with a view to her 'getting the keys' on Saturday night. That will be one less job to do before 'Baldur' arrives. This is the name that Craig affectionately called the bump last night. We have been toying with Norse names (Freya, obviously) but Baldur is a step too far,me thinks, a) it sounds like 'Boulder' when you say it and b) there is also a role playing game connection. 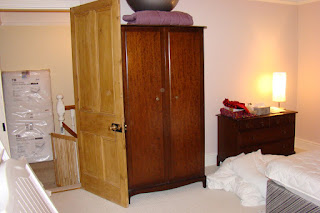 Here are the 'before' shots of what used to be our grown up spare room, which is about to be overwhelmed with brightly coloured plastic crap. Oh well as long as she loves it and there is room for me to crash out on the nights that she might not be well in the future. 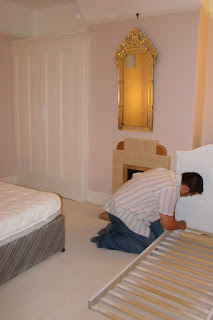