I should really be in bed.

It's 9.20 am and I have just got back from a really busy night shift... nothing that I couldn't cope with but a little like a nightmare where you are running through thick treacle and not getting anywhere. Nevermind- only one more shift to go. Woop woop.

The house looks like crazy, dirty people live here but it has been a nice weekend with Craig and the girls. I got up on Saturday to find that it was a beautiful day... Freya and I hung out and had breakfast before sitting in the sunshine in the garden- she really is the most easy going companion to have around at the weekend. Craggy finally joined us at elevenish for a 'cuppa tea'. Everything seemed nice and quiet so I suggested that we opted for a weekend at home rather than galavanting around beaches and monuments etc, so we took a mooch down to town and found that it was Darwen Gala weekend.

Darwen Gala basically involves a small amount of fairground rides and tombolas etc set up on the green opposite the park. We took Freya down thinking that there might be rides small enough for her but alas, it was all a little too big. There is also a procession through town for local groups and clubs i.e kids dance troupes etc. 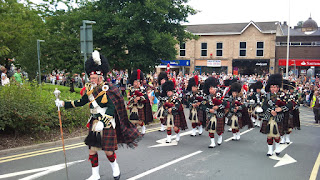 Freya seemed to enjoy the party atmosphere and there were some cool vehicles to see. This is a little Tuk-tuk advertising home brew of all things. 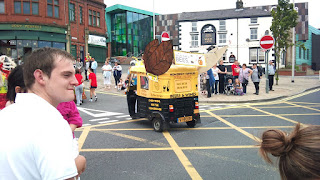 We did a lot of travelling around in these scary vehicles when we went to Thailand with our friends Nicola and Nick in 2006. 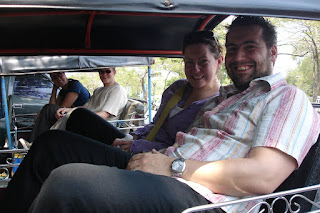 Before watching the parade we had gone to 'Gibbo's' the hardware shop to get some brushes for our final push in decorating Freya's new room. We were in town at about 12 so the logical thing to do was stop and have some lunch. The only place that really fitted the bill was CJ's which is a small cafe in the centre of Darwen. It is really unpretentious and kind of like going to someone's mums for tea. They do glasses of squash, toasted tea cakes and milkshakes made with crusha. It may not be cosmopolitan but it is cheap and cheerful, plus we had mooms with us so could hardly venture inside anywhere. Freya had come out in t-shirt and shorts and proceeded to cover herself in quiche and pop. So I had to dash to the charity shop where I picked up a pink velour tracksuit for £2 (bargain!) and then next door to Superdrug for wipes. Will I never learn about going out without baby stuff!

Sunday saw us taking a trip to IKEA Warrington to pick up final bits for Freya's room. It was good to have her with us as she was all over stuff. We could really see the stuff that she liked, which included any small beds. I am excited about doing the room up. I bet Craig's not excited about the flat pack issue... we'll keep you posted!

Definitely off to bed now, don't want to pick Freya up late from mum's as they have company today.
Posted by Herding Cats at 09:57